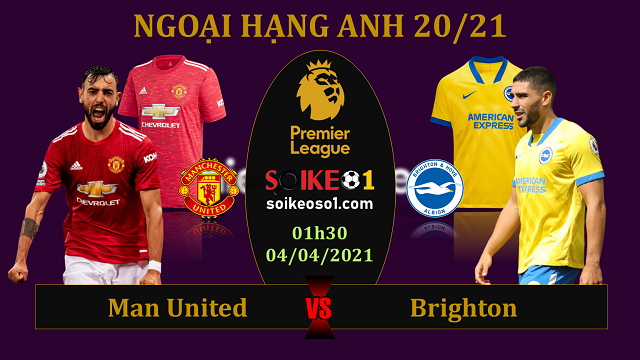 Before the international series, Man United lost on away field for the first time in the domestic league. The Reds failed 1-3 at Leicester Stadium in the quarterfinals of the FA Cup. However, everything is still under the control of coach Solsa when MU is ranked second in the Premier League and prepares to kick the quarterfinals of the Europa League with Granada. With 14 points less than Man City, the chance for MU to win is very low, but with 8 points more than 5th place, the task of protecting Top 4 is not too difficult for them. A victory over Brighton will also help the Red Devils motivate a trip to Granada in the middle of next week.

Brighton is MU's favorite opponent when they have won 7/9 matches since this team was promoted to play in the Premier League. This season alone, they won 3-2 on this opponent's field in the first leg of the Premier League and won 3-0 in the League Cup. All four matches against Brighton, the Red Devils have won, so they are confident to do the same. The visitors are ranked 16th with a very erratic performance, so it is not too difficult for Solsa's teachers and students to win all 3 points. However, the handicap ratio is too low under 1 left can be a big obstacle for the homeowners of this match when things are too different.