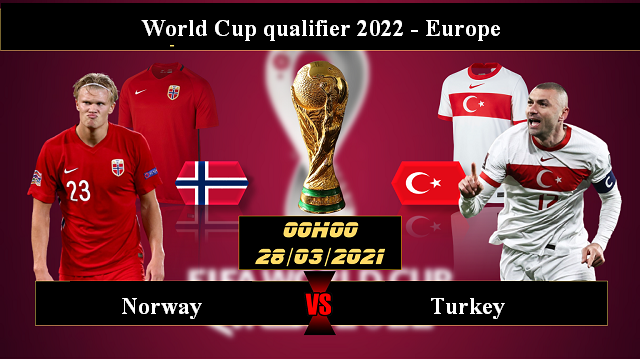 Both Norway and Turkey had 3 points on their opening day. Worth mentioning, Norway only won 3-0 on the weakest team in the table, Gibraltar. Turkey, on the other hand, was shocked when they won 4-2 against the strongest team in the group, the Netherlands.

This victory shows that Senol Gunes teachers and students can completely think about competing at the top of Group G with Lornang. It should be known that only the top team will win a direct place to participate in the 2022 World Cup, while the second-place teams will have to kick the second round.

In this second round, they will meet 9 other second-place teams and meet more teams. topped the table in the Nations League that took place earlier. Obviously, having to play the play-off round brings too great a risk, so both Turkey and Norway will try to earn hope of competing first with the Netherlands.

In the past, the two teams had 9 encounters with quite equal results when Norway won 3, drew 2 and lost 4 matches. The last time the two teams met was in Euro 2008 qualifying. At that time, Turkey drew 2-2 at home and won 2-1 away. Worth mentioning, this match, Norway will not be able to kick home for the nine-country travel ban with Turkey to prevent COVID epidemic. Therefore, this match will take place on a neutral field in Spain. This makes Norway lose many advantages when home field is their strong point. In the past 2020, Norway won 3, drew 2 and lost 2 matches. Before that, in the Euro 2020 qualifiers, they played very well but only won 4, drew 5 and lost 1 match. In particular, Norway is unbeaten at home, so losing home advantage shows that they will have difficulty.